It is always a pleasure to meet triathlete Dr. Amit Samarth in Thanjavur, and this time around when I bumped into him at the Annai Sathya Stadium he informed me about a middle distance running race in Thirukattupalli town, about 28 Kms from Thanjavur.

Amit has been championing many public health initiatives in and around Thanjavur through ProHEALTH Foundation. Amit and ProHEALTH also organized the inaugural Tanjore Rural Marathon in December 2013, which is back in its second edition on 21-Dec-2014.

My family was in Thanjavur to celebrate Diwali with our parents and we enlisted ourselves as volunteers for the Thirukattupalli marathon. Race date was 25-Oct-2014 and there were three categories of runs: 3K (kids below 10 years), 5K (kids between 10 and 15 years) and 10K (Open category, above 15 years). 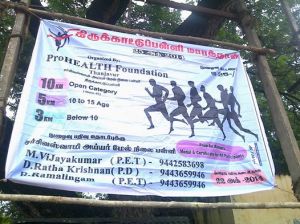 Amit told me that there were about 800 registrations already, including nearly 200 girls. It was heartening to see such huge enthusiasm for running in a rural setting. Amit also invited my 6-year old son to run the 3K. Local sponsors had pledged about Rs. 20,000 towards prize money, which should hot up the competition. It promised to be a cracker of an event and we were eagerly looking forward to it.

Race day arrived and we started from Thanjavur around 4:30 AM, and arrived at the start point shortly after 5 AM. Amit was already busy, and we got to know that the venue of the race in Thirukattupalli, Sir P. S. Sivaswami Iyer Higher Secondary School, located in the heart of the town is a 100+ year old institution. The place was buzzing with athletes even before the gates of the school opened! 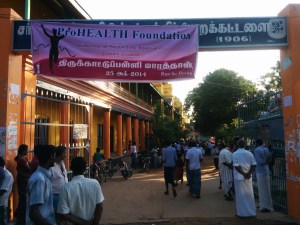 We helped a bit with traffic management and directed parents and other spectators’ vehicles to designated parking areas so that they do not obstruct runners. The run was on a two-lane main road and the route to follow was an out and back loop of 1.5K, 2.5K and 5K according to the category. The local police also supported the race by blocking vehicular traffic for the runners.

Race start was delayed by a few minutes because of the huge crowd and a large number of last minute entries. Amit and the ProHEALTH team should be commended for encouraging everyone to run, even if they had not registered in advance. The crowd had swelled to excess of 1000. At about 6:10 AM the 10K runners were off, followed shortly by the 5K runners. The youngest of them all, the 3K athletes were waiting patiently for their ‘seniors’ to be flagged off. My son joined the 3K crowd, and accompanied by my wife, who ran with him, had a whale of a time running the race. The entire town of Thirukattupalli was out on the street, cheering the runners and encouraging them to run harder. Vehicular traffic was stopped for a while, and curious bus passengers got down from their seats and joined the Thirukattupalli crowd in cheering the runners. 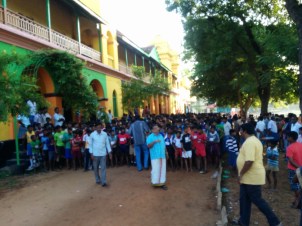 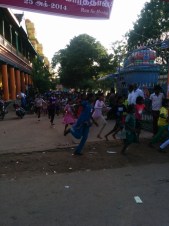 And they are off! 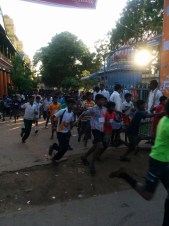 Overall it was a fun event and we had a great time doing our small bit towards its organization. My son thoroughly enjoyed the run and proudly wore his medal during our drive back home. No words of appreciation are enough for Amit and ProHEALTH for bringing running closer to the masses and making such events accessible to all. If such races mushroom in every village, recreational running will no longer be seen as an activity of the elite. For a mere Rs. 25 registration fee, the team has managed to provide a finishers medal, certificate, biscuits, bananas and water. There is plenty of scope for the big city organizers to learn from the Thirukattupalli Marathon. Hope this race becomes bigger and better next time around.