A race that I was looking forward to, almost turned out to be a “Did Not Start”.

The Kaveri Trail Marathon is one of the most popular trail races in the country organized by Runners for Life. KTM, as it is abbreviated usually would always be special for me since it was the first ever running event I participated in (I did the 10K in 2012). This time around I had been training for the full marathon. My previous marathon personal best was around 5 hours, and I was eagerly hoping to set a new personal record in this year’s race.

The race was scheduled on 21-Sep-2014 and the course is in Srirangapatna, near Mysore, around 130 Kms from Bangalore. My friend Bharath (who was doing the half marathon) and I decided to drive down on 21st early morning directly to the race, since we were participating in a hackathon on 20-Sep-2014. It turned out to be a big mistake and I could not get to bed before 11:30 PM on 20-Sep-2014. With less than 2 hours of sleep, I woke up, got ready and we started the drive to the race venue. Stopped in Maddur Cafe Coffee Day for morning coffee and all seemed well. Unfortunately, as we neared the race venue, things turned bad and I was overcome with nausea. I got down from the car and puked on the road, emptying much of the coffee that I had taken in earlier. Felt really weak at that point of time, and if not for Bharath’s motivation, I would be decided to give the race a miss.

The Kaveri Trail Marathon trail is undoubtedly one of the most beautiful courses in the country. It is a 10.55 Km out and back loop which the full-marathoners have to do twice. The river Kaveri runs alongside the entire trail and lush green fields make up either side of the course. It is indeed a visual delight, enough to make runners forget any pain they are feeling. Runners for Life are renowned for their near perfect organization and the full marathon started exactly at the stroke of 6 AM. 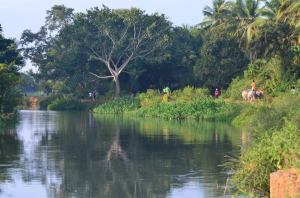 Since I wasn’t very sure about my health, I decided to take it slowly maintaining a pace of about 7mins/Km for the first half of the race. I was pretty much leading from the rear, with my slow pace. However, I did not let that get into my head since I wasn’t sure whether I would be able to finish the race if I pushed myself. I consumed a gel approximately every hour an a sip of water every 30 minutes or so. I completed the first half of the race in under 2 h 30 m and I was reasonably pleased with myself, considering that I was doubtful even to start.

Meanwhile, I saw that Bharath, who was targeting a half marathon finish time of under 2 hours, did very well to finish in 2 h 3 m, which was a commendable performance considering that he had been deprived of sleep as well, and not to mention he did the driving all the way from Bangalore.


Having cheered Bharath on his finish, I started the second half of the race, setting a overall target of 5 h 15 m finish. By now, I had given up hopes on setting a new personal best record. However, soon things turned worse. The Sun God came out in full force and by the time I finished 26-27 Kms, I started struggling and switched to run-walk-run mode. This continued till the 3/4ths mark and with the final 10.55 Kms to go, I knew that even 5 h 30 m would be very optimistic. The sun showed no signs of relenting and I stopped almost at every aid station to have a sip of water and electrolyte drink. I have personally found that drinking too much causes my stomach to bloat and it is not at all a good feeling. However, I was helpless, my lips, mouth and throat dried up every few minutes, and I had to take a gulp of water.

I ended up walking most of the last 8-9 Kms with some chatty company. I met a guy who was participating in his first ever race and he is doing a full marathon! Pretty brave, I must say. Towards the end I gathered some energy for a sprint finish and completed the race 6 h 2 m after I started (which was my worst ever marathon performance, if you don’t consider my IRONMAN New Zealand marathon leg). 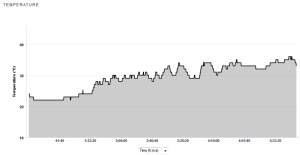 Jokes apart, the post race brunch was simply awesome and provided much needed relief after being out there on the course for six hours. Many thanks to Bharath for patiently waiting for me to finish, and driving me both ways. He must have been waiting for me for more than three hours.

1) KTM is a tough race, I had seriously underestimated it.
2) Do not compromise on sleep the day(s) before the race. Next year I will stay closer to the venue and not do the 3 hour drive from Bangalore on race day.
3) Wear a cap, especially if you are a slower runner.