A totally unplanned, last minute registration, turned out to be a fun family outing on a Sunday morning.

I had been seeing some posts about the IBM BlueMix Monsoon Marathon on my Facebook feed, but didn’t think much about it till almost the last minute when my wife and son decided to go for a running event on the weekend. Race day was on 31-Aug-2014 and online registrations were closed. Spot registrations were however open at the bib collection venue: Forum Value Mall, Whitefield, Bangalore which was a good 25 Km distance from my home. Went along with the family, finished the registration process and collected our bibs and t-shirts. I signed up for the half-marathon while my wife and son signed up for the 5K. One of our neighours and his son also signed up for the 5K. Timing chips were optional and cost extra, and none of us picked up timing chips since we did not have any realistic chance of a podium finish.

We started around 5 AM from home to cover the 25 Km distance to the start point. Reporting time was 5:45 AM and the 21K was scheduled to start at 6 AM. Milkha Singh was to flag off the race and we were quite excited to catch a glimpse of the legend and hear him speak. We were not disappointed and soon enough Milkha Singh reached the venue and gave an inspirational speech about hard work and his dream to see an Indian winning a Olympic medal in athletics in his life time. The kids managed to get themselves clicked with the legend himself. 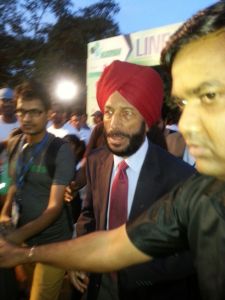 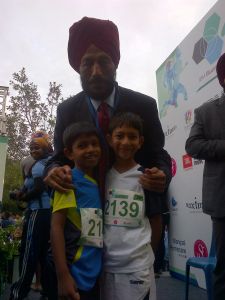 The kids with the legend

The 21K flag-off was delayed by about 15 minutes but we were pretty charged up after Milkha Singh’s inspirational speech. The race was in Whitefield, Bangalore: the city’s IT district. The course looked pretty flat with no flyovers or any major climbing to do. The entire race was on properly paved road. The race organizers had done a commendable job in cordoning off traffic along the run course, though there were some complaints (in the organizer’s Facebook page) from local residents about the “strict” traffic restrictions.

My primary goals for the race was two-fold:

My personal best for the half-marathon distance was 2 hour 19 minutes set in 2013 Dream Runners Half Marathon, Chennai and my secondary goal for this race was to set a new personal best.

With these two thoughts in mind I set off and got into a steady rhythm soon. The first 5Km of the race was smooth sailing with a heart rate of less then 155 bpm and a pace of about 6m30s per Km. I knew that if I maintained the same pace, I would beat my previous personal best. Kilometers 6-15 saw me put in some additional effort to maintain the same pace and my average heart rate rose closer to 160 bpm for a 6m30s/Km pace.

Towards the 15th Km, I began to tire and decided to take my fist sip of water at the next aid station, which thankfully, was not very far away. I grabbed a 200 ml bottle of water and it felt refreshing to have a drink. Unfortunately, there weren’t any dustbins after the aid station, and I had to discard the empty bottle on the side of the road. Hope the organizers make arrangements to strategically place dustbins after aid stations so that runners can discard their empty bottles / cups instead of littering the roads.

I had to put in additional effort to maintain pace for the rest of the race, my HR climbed to mid 160s bpm but I could still maintain a consistent pace. By now I knew that I was on my way to a new personal best. For the last few Kms, I didn’t care much about my increasing heart rate and romped home in 2h16m setting a new personal best. Overall, I was quite happy with my performance, having achieved a PB in fasted state with on course nutrition consisting of 200 ml water.

More or less steady pace throughout

There were lots of fun activities after run: Ice bucket challenge by Milind Soman, dance etc. Kids had a lot of fun and they even got to volunteer for a while distributing medals for the finishers. Post run refreshments consisted of biscuits and some juice. On the whole, it was a well organized, fun-filled event on a Sunday morning and I hope to be back next year again! 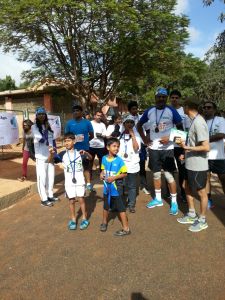 Kids got to volunteer for a while 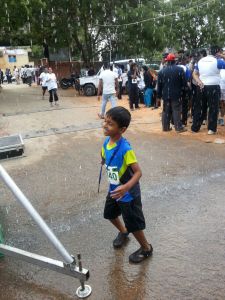 One notable deficiency in aid stations was that they stocked just water. There weren’t any energy drinks or bananas or biscuits commonly found in other races. While this didn’t affect me personally because I didn’t plan to consume any, it could have been a factor for other runners. Hope the organizers make amends next year.